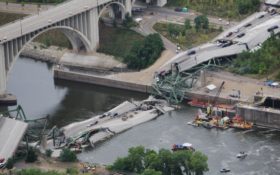 President Donald Trump has repeatedly promised to invest greatly to renew America’s crumbling infrastructure… but is it too late?

Aa recent report sheds light on just how desperately necessary those improvements actually are, and an urban renewal group just released a list of “Freeways Without Futures,” which includes 1- highways in America that they claim urgently need to be demolished.

Lynn Richards, president and CEO of CNU told Fox News, “These highways should absolutely be on the list of federal infrastructure priorities. Replacing them with boulevards would save money, support small business, and open up land for new development.”

Here’s the list of 10 major highways that Trump could destroy within him term:

This dangerous highway was built along NY State Route 198 in Buffalo in the early 60s, and divides part of a public park.

The design of the highway seemed like revolutionary engineering at the time, but the result has been a more dangerous ride for drivers than one would expect. For example, in 2015 a car traveling on the expressway went over the barrier into the park, killing a three-year old and injuring a 5-year-old.

The highway is also adjacent to Buffalo State campus, adding more concern about pedestrians so close to the high-speed traffic.

The highway, which once ran between major urban areas of Texas in the 20s, is now surrounded by vacant lots and desolate streets. Now locals are alleging the highway is preventing further development that could create housing and job opportunities for residents.

There is regional traffic routes available for frequent drivers on that highway, resulting in the conclusion that removing it would result only in further progress, and likely hinder no one.

This Interstate was devastating for minority communities when it was built, cutting them off from opportunities and services. But the Colorado Department of Transportation announced a plan to expand the highway, resulting in demolished houses and businesses.

The group Unite North Metro Denver proposed rerouting the traffic and transforming the highway into boulevard, allowing for business and housing opportunities and connecting the now separated communities. It’s a debate that will likely continue, unless Trump steps in and adds this highway to his infrastructure plan.

In another case of minorities separated from the rest of the city, this underground interstate is notorious in Detroit. Constructed in 1959, the mile-long highway separates Detroit’s Riverfront, Greektown, Eastern Market, and Stadium districts.

Before the highway was constructed, the area was known as a flourishing community. But it was cut in half by the highway as part of “urban renewal” and the neighborhood suffered. Trips on Michigan’s shortest highway have incredibly decreased, leading critics to question its overall value.

San Francisco is the perfect example of the potential success removing highways can yield. After removing the Embarcadero and Octavio Boulevards, the city has thrived. Now, its neighbor Oakland is looking to follow in the same path. Oakland’s Interstate 980 is currently dividing two major parts of the city.

Replacing the highway with a boulevard would reconnect West Oakland and Downtown, opening 21 new city blocks and 17 new acres of land. The removal has been in discussion since its completion in the late 80s, but with Trump’s increased funding for infrastructure, it could finally become a reality.

Once again, this highway is dividing communities and take up valuable land. In the 60s, the State of California used a half-mile of land to extend Route 710, consequently breaking up Old Pasadena from the rest of the city.

There is a motion among the community to reclaim the land and reconnect the city, under the initiative, The Connecting Pasadena Project. And with funds from Trump, these communities could become one again.

Called an “evacuation route” by Rochester City Engineer James McIntosh, this Inner Loop led everyone out of Rochester. With the city turning around and the population rising, the partial removal of this Inner Loop has already begun. Thanks to funding assistance through a USDOT TIGET grant, part of the loop is being restored as a boulevard safe for pedestrians.

Anticipating the success from the partial removal, the City of Rochester hopes to bring in other sections of the loop to create more surface streets and connect the city with neighborhoods.

Judging from previous, incredibly successful, highway removal, the City of San Francisco is ready to do it again. The removal of earthquake-damaged freeways in ’89 allowed economic and housing development.

Interstate 280 is next on the city’s list to demolish, with a desired endorsement from Mayor Ed Lee. It would reconnect divided neighborhoods and open up land to housing and commercial development.

Critics say this interstate cut through the heart of Syracuse, and hurt the historic African-American community living there. A result of the highway was vacant lots, demolished homes, and abandoned properties.

Replacing the highway with a surface street would do wonders for Syracuse by reconnecting communities and freeing up land for development. New York Governor Andrew Cuomo said removing I-8 “could be a transformative project that really jump-starts the entire region.”

The Delaware River waterfront is a scenic and potential tourist hot spot, but is disconnected from Trenton New Jersey by a big, ugly highway.

A plan was in place to replace the highway before the 2008 recession, but now with President Trump in office, signs are good that this redevelopment project can receiving the funding it needs and breathe life back into Trenton.