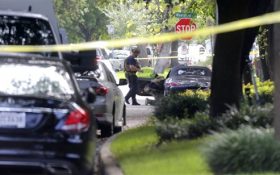 Police say a 22-year-old Indiana woman died at the scene of a home invasion near Cincinnati where eight people were wounded, including three children and a pregnant woman who had revealed the gender of her child during a party.

The Colerain Township police chief said at a news conference Sunday afternoon that two men opened fire Saturday night with handguns in the living room of the home. Chief Mark Denney says the two men haven’t been identified or arrested. He wouldn’t discuss details of the investigation.

Denney says none of the eight who were wounded appeared to have life-threatening injuries. He says the children are ages 8, 6 and 2.

The pregnant woman told WXIX-TV that she lost her baby, a boy, after being shot in the leg.