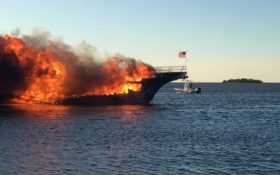 Fourteen people complaining of chest pain, smoke inhalation and other minor injuries were taken to the hospital to be checked, authorities said, adding one woman died after the huge fire consumed the boat close to a residential neighborhood.

Port Richey Chief of Police Gerard DeCanio said all 50 passengers and the crew reached land safely as the fast-spreading flames devoured the shuttle boat. Huge flames leaped from the vessel and a dark plume of black smoke cut across sunny skies on an unusually chilly winter day in the Tampa Bay region.

DeCanio said the shuttle boat was close to shore when it began having engine problems after leaving its moorings at Port Richey, a suburban community about 35 miles (55 kilometers) northwest of Tampa. He said the crew decided to turn back veering close to a residential neighborhood as smoke belched and then flames kicked up.

A witness told the Tampa Bay Times the shuttle boat passes regularly passes by his family’s home, carrying patrons to and from a casino ship offshore. But this time, he said he saw the clouds smoke billowing from the shuttle vessel and heard shouts and screams.

“They didn’t have much time to decide whether or not to jump,” said Bakr Jandali, 19, adding he watched from his home as huge flames rapidly spread. “The fire was moving fast. It was a hard jump.”

Jandali said passengers had to jump down about 12 feet (3 meters) into chilly and somewhat shallow water. He said those escaping had to wade through waist-deep water to land. Local residents there offered them towels, socks and water to drink.

“All of us, my family and the neighbors, brought them towels and water,” Jandali said. “They were so cold.”

The shuttle boat regularly carries people back and forth from the Tropical Breeze Casino Cruise, which is offshore because it can’t legally operate close to land, according to authorities. They said the shuttle vessel was headed out to the casino ship at the time of the fire.

Pasco County Fire Rescue official Shawn Whited said that after passengers jumped into the water they made their own way or where plucked up by other boats.

Local television news footage at the site showed survivors cloaked in blankets trying to warm themselves after their ordeal.

Larry Santangelo, 57, said he had just driven into his neighborhood Sunday afternoon when he saw smoke and fire.

He told the Tampa Bay Times that he then saw people wandering about confused, wet and cold. One woman collapsed on reaching shore and vomited, he said, adding he took about 30 of the passengers into his garage to warm them up.

“It was so windy and they were soaking wet,” said Santangelo, adding he worried some would suffer from hypothermia.

It wasn’t immediately clear what caused the fire.