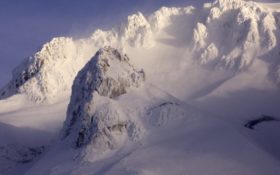 One climber fell to his death and several others had to be rescued after conditions turned treacherous on Oregon’s tallest peak.

More than a half-dozen people had been climbing near Mount Hood’s peak when a climber fell about 1,000 feet, (304 meters) said Sgt. Brian Jensen, a Clackamas County sheriff’s office spokesman.

“One of the guys slipped,” said climber Quinn Talley of Welches, Oregon, who had been descending after summiting Tuesday morning. “At first he was just sliding and right before he disappeared, he started cartwheeling.”

Talley, who said he’s climbed the mountain about 20 times and has never seen worse conditions, said he tried to reach the man, but the ice was too dangerous.

“Normally, you like a frozen crust on snow so your crampons don’t ball up with snow, but this is different,” Talley said. “With the rain and freeze cycles, there’s something called rime ice … and it’s really loose and normally it’s just fluffy. But these were like dinner plates, hard ice dinner plates.”

KOIN-TV reported that video taken from a helicopter showed other climbers performing CPR on the man before he was airlifted by an Oregon Army National Guard helicopter to a hospital. He was later declared dead. Authorities have not released his identity.

Authorities say all climbers who were stranded on Oregon’s tallest mountain are safe. More than a half-dozen had been climbing near Mount Hood’s peak on Tuesday when they encountered tumbling rocks and falling ice. One climber fell to his death.

Mount Hood, a peak notorious for loose ice and rocks in warm weather, is a popular climbing site that has seen dozens of accidents and fatalities over the years. Thousands climb it each year, mostly in the spring.

The sun has been out this week and the temperature was around freezing at the spot where the climber fell, said Russell Gubele of Mountain Wave Search and Rescue.

“This is the kind of weather conditions and the time of year where you often get falling ice, falling rocks and problems,” Gubele said. “It sounds like the conditions up there are very unsafe right now.”

Climbers used their cellphones to report that conditions were hazardous and described the falling rocks and ice “like a bowling alley,” said Air Force Maj. Chris Bernard of the 304th Rescue Squadron.

The stuck climbers were on or near the Hogsback area near the summit of the 11,240-foot (3,429-meter) mountain east of Portland.

Rescuers made it up to the other climbers Tuesday afternoon at 10,500-foot (3,200-meter) elevation and assessed them before starting down the mountain.

Two climbers who were in the same party as the man who fell were guided down the mountain to a snow tractor, which took them to Timberline Lodge at 6,000 feet (1829 meters). Rescuers used a sled and a rope system to bring down a woman in the party who said she was unable to move.

“It was very hard to move under these types of conditions and she was very brave and very stoic during her evacuation,” he said of the woman who was rescued, adding that she was able to get out of the snow tractor under her own power.

Three other climbers made their way down the mountain without assistance, according to the sheriff’s office.

Wyatt Peck, 26, said he started to go up the mountain Tuesday, but turned around. He said the conditions were so treacherous that he and a friend could not get their pickaxes and crampons into the snow that was melting from a hard freeze overnight.

Peck said others in his climbing group continued, and he was concerned that they were among those stranded.

“I saw like I said a lot of people were struggling traversing,” he said. “I think they just got to the summit and were so exhausted they didn’t know what to do to get back down — and that’s the hardest part, to get back down.”

Peck said climbers must know when to abandon a summit attempt.

“The mountain’s always going to be there — your life’s not worth it.” he said.