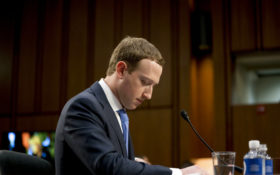 What’s more, Facebook acted after receiving a warning from the FBI.

The host, Joe Rogan, asked Zuckerberg about his process for deciding which posts to remove. Zuckerberg claimed to look at a given post’s country of origin and then perform a cost-benefit analysis of taking it down.

Then, the two personalities began talking about Hunter Biden’s laptop.

Zuckerberg talked about Facebook’s plan to suppress the story.

So, we took a different path than Twitter. Basically, the background here is the FBI basically came to us, some folks on our team, and was like, “Hey! Just so you know, you should be on high alert. We thought there was a lot of Russian propaganda in the 2016 election, We had it on notice that there’s about to be some sort of dump that’s similar to that. So just be vigilant.”

So, our protocol was different from Twitter’s. What Twitter did was they said, ‘You can’t share this at all.’ We didn’t do that. What we do is we have, if something is reported to us as potentially misinformation, important misinformation, we also have a third-party fact-checking program, because we don’t want to be decided what’s true and false. And for the, I think it was five or seven days when it was basically being determined whether it was false, the distribution on Facebook was decreased. But people were still allowed to share it. So you could still share it. You could still consume it…

So basically the ranking in the news feed was a little bit less. So fewer people saw it than would have otherwise. I don’t know [the percentage] off the top of my head, but it’s meaningful. But basically a lot of people were still able to share it. We got a lot of complaints that that was the case. Now, obviously, this is hyper-political issue. So depending on what side of the political spectrum, you either think we didn’t censor it enough or censored it way too much. But we weren’t, sort of, as black and white about it as Twitter. We just thought, “Hey, look! If the FBI, which I still view as a legitimate institution in this country — It’s a very professional law enforcement — they come to us and tell us that we need to be on guard about something, then I want to take that seriously.”

The media world was shaken by this remark. The artist Mike “Beeple” Winkelmann, once a guest on the podcast himself, released a political cartoon about Rogan “grilling” Zuckerberg.

Still, Zuckerberg did not say that FBI told Facebook to monitor that story, in particular. Rather, Zuckerberg seems to have inferred that for himself.

After all, Donald Trump was serving as president at the time, and he had appointed the FBI’s director.

Rogan asked, “Did they specifically say you need to be on guard about that story?”

Zuckerberg answered, “No, I don’t remember whether it was that specifically, but it basically fit the pattern.”