Zookeepers use puppet to raise this endangered bird (pic!) - The Horn News 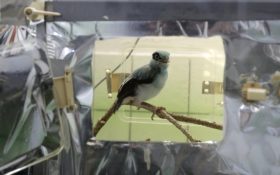 Zookeepers in Prague have turned into puppeteers in an effort to save the critically endangered Javan green magpie.

Zoo officials saved one precious egg after the parents threw a second egg out of their nest. The magpie chick that hatched a month ago is being kept in a box and is being fed using a puppet that imitates a parent bird.

Bird keeper Antonin Vaidl said the puppet is needed to make sure the bird will be capable of breeding, which it won’t be if it gets used to people.

“It is a critically endangered taxon, every individual is important,” Vaidl said. “This way we can eliminate the possibility that the bird would not be able to breed … it will grow into a healthy individual that is able to reproduce.”

Vaidl said the puppet doesn’t have to be a perfect imitation of an adult bird because the baby responds to certain signals, such as a red beak, black patches around the eyes and a bright green background.

The rare Javan green magpie and other birds are popular as status-symbol pets in the magpie’s native Indonesian island of Java and elsewhere in Asia.

The green magpies are one the most endangered birds on Earth. It’s estimated only about 50 of them are living in the wild while another 50 are in captivity in few zoos. In Europe, about 30 of them are in Britain and Prague.

A zoo in the British city of Chester brought six pairs of them from Asia in 2015, giving one pair to Prague and another to a zoo in Jersey as part of a coordinated effort to save the species.

“To save it from extinction … that’s the reason we have been doing this,” Vaidl said.