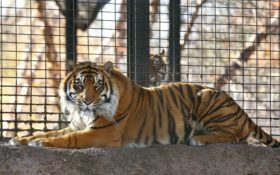 Officials say a Kansas zookeeper who was attacked by a Sumatran tiger is out of intensive care.

Topeka city spokeswoman Mally Hadfield says the woman is stable and was moved Sunday to a different unit of the hospital. The woman’s name hasn’t been released and Hadfield says her family is requesting privacy.

The 7-year-old male tiger, named Sanjiv, attacked the woman Saturday morning in his outdoor habitat as several visitors watched. The tiger was lured away so the injured zookeeper could receive emergency aid.

Zoo director Brendan Wiley has said the zoo is investigating and will determine what changes might be needed after talking to the injured worker, who has worked at the zoo since 2002.

The zoo has no plans to euthanize Sanjiv, who is back on display.