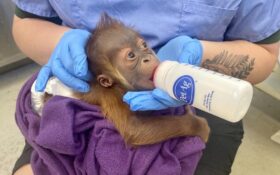 The endangered Sumatran orangutan infant at New Orleans’ zoo is being bottle-fed because his mother wasn’t producing enough milk.

The still unnamed baby was being tube-fed as well, but the tube was removed Jan. 13, Audubon Zoo spokeswoman Annie Kinler Matherne said Wednesday.

The great apes named for their long red hair are considered critically endangered by the International Union for Conservation of Nature. Threats to the Sumatran species include hunting and the destruction of the forests and peat swamps where they spend nearly all their time in trees.

Twelve-year-old Menari gave birth to the baby on Christmas Eve; a twin brother was stillborn. Days later, the baby was showing signs of weakness and lack of nursing.

Since then the infant has had round-the-clock care from zoo staffers wearing furry vests that the baby can cling to. Until the feeding tube was removed, their duties included making sure he didn’t pick or pull at the thin tube inserted through his nose.

Since Jan. 8, six to seven hours a day has been spent in front of the other orangutans so they can get to know him, Lessnau said.

“Care staff have noticed that the group is most intrigued when there is a diaper change or a bottle feed happening!” a Jan. 13 update said.

Bulan, at age 2 the oldest of father Jambi’s three New Orleans offspring, “is especially interested in the new little guy,” the statement said. Madu, the second, was born in February 2021.

Experts from Children’s Hospital of New Orleans have helped out, including a speech pathologist brought in to suggest ways to stimulate the baby’s suckling, Lessnau said.

Menari is getting a drug that can help maintain lactation, said Bob MacLean, the zoo’s senior veterinarian.

“We don’t know if she will maintain or restart lactation if we have a successful reintroduction of the infant to her,” he said Wednesday.

But there’s hope in Menari’s history: She also was hand-raised.

“Her mother, Feliz, did start lactating for Menari when she was finally successfully reintroduced to her and started suckling at around 8 months of age,” MacLean said in a statement.

A recent video shows Dr. Daniel Cutler, the zoo’s associate veterinarian, gently pulling the baby’s hands from hospital keeper Amy Jones’ fur vest, saying, “He’s … probably not going to like it — he wants to be nice and close and cuddle.”

The baby clung to Cutler’s index fingers as it was raised into the air. Looking around, he pulled himself up until the top of his head was almost even with the fingers he gripped.

“He’s starting to say, ‘I don’t like where I’m at … put me back down.’ Which is exactly what we want him to do,” the veterinarian said.