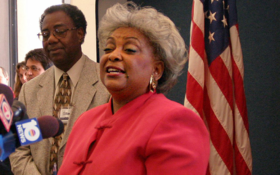 Since the 2018 midterm election, the nation’s eyes have been on Florida’s Broward County and Palm Beach, two heavily Democratic areas that continued to find tens of thousands of uncounted ballots days after the election that nearly tipped the election in favor of Democrats.

By uncovering empty provisional ballot boxes in rentals cars and school closets, “finding” tens of thousands of uncounted votes, and “misplacing” thousands of others, election officials brought Democrats within a hair’s breath of winning both a Senate seat and the state’s governorship.

Despite it, Republicans ultimately prevailed. Rather than face the fallout from the recount controversy, Broward County Supervisor of Elections Brenda Snipes has quit.

The South Florida Sun-Sentinel reported late Sunday that Snipes turned in her resignation letter earlier in the day. The report cited an attorney who works as counsel to the Broward elections office, Burnadette Norris-Weeks, as saying Snipes is to step down from her post in January.

Snipes has been the top elections official in the south Florida county since 2003. She faced serious criticism for her mishandling of this year’s elections in the populous county as well as its legally required recount in the close races.

Snipes, a Democrat, has been a controversial figure for years. Critics accused her of stuffing the ballots and rigging the election in favor of liberal candidates, which she has denied. However, on Saturday, Snipes did admit that her office had “lost” more than 2,000 ballots during the recount.

She couldn’t immediately be reached late Sunday for comment on the report.

Gov. Rick Scott, who has the power to remove Snipes from office, was among those sharply critical of Snipes. President Donald Trump made frequent allegations that the recount process was haunted by rampant fraud.

After longtime Democratic Sen. Bill Nelson officially ended the bitterly close election by conceding the race to Scott on Sunday, she quickly quit.

Nelson’s concession capped tumultuous days of recounting and political tension in the perennial presidential swing state. It also will likely end the long-running political career of the 76-year-old Democrat.

He was first elected to Congress nearly 40 years ago and then to the Senate in 2000.

Nelson and an army of Democratic lawyers had filed several lawsuits over the recount, but a federal judge rejected almost all of them.

In the end, they had no choice but to concede.