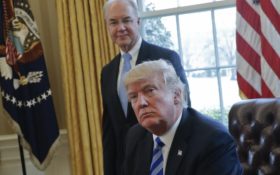 Under President Donald Trump, there’s not going to be anymore wasteful personal travel billed to the taxpayers — something former President Barack Obama’s White House was frequently criticized for.

Trump says he is “not happy” with his Health and Human Services Secretary Tom Price following reports that Price used a private plane for official business.

And Trump says he let Price know it.

Trump spoke to reporters Wednesday as he departed the White House for a trip to Indianapolis to sell the upcoming GOP tax reform plan.

Price said Saturday he would stop flying private planes on official business while an internal review of the flights is being done. He’s also said he welcomes the review.

Price, a former Republican House member from Georgia, chartered flights to a resort in Maine where he was part of a discussion with a healthcare industry CEO. That was according to a report in Politico. He also chartered flights to community health centers in New Hampshire and Pennsylvania.

Price said all the flights were work-related and used for official business, including for trips related to the opioid crisis or the recent hurricanes.

Price’s expensive travel is the complete opposite of Trump’s campaign pledge to “drain the swamp” of money and influence in Washington and Price’s long-standing criticism of government waste — and it’s not going to fly in the Trump White House.

Trump often criticized former Obama and his high spending on travel. According to Judicial Watch, over the eight years he was in office, Obama and his family spent almost $100 million on personal travel.

Trump’s promise to “Drain the Swamp” includes establishment Republicans abusing their access to taxpayer dollars, which now appears to apply to Price.