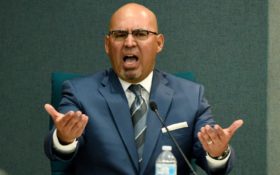 A California school board has voted to fire a teacher who was seen on video calling members of the U.S. military “the lowest of the low” while urging a student in a Marine Corps shirt to not join the service.

“His comments do not reflect what we stand for, who we are,” Board of Education President Aurora Villon said, adding that “the classroom should never be a place where students feel that they are picked at, bullied, intimidated.”

Salcido faced serious backlash after a video went viral of him teaching government class telling students that anyone who wants to serve in the military is a “dumbs—.”

“Think about the people who you know who are over there. Your freaking stupid Uncle Louie or whatever. They’re dumbs—s,” Salcido can be heard saying in the Jan. 25 tirade.

“They’re not like high-level thinkers, they’re not academic people, they’re not intellectual people. They’re the lowest of our low.”

The board said he Salcido would remain on unpaid leave pending any appeals to the State Office of Administrative Hearings.

The Southern California News Group reports Salcido said in a text message that he would not comment until after being officially notified.

Fox News reports, “The student who secretly recorded Salcido — later identified by KTLA-TV as Victor Quinonez — told Fox News opinion writer Todd Starnes in January that his teacher had ‘a history of being anti-military.'”

The rant even prompted a strong reaction from White House Chief of Staff John Kelly, who said Salcido “ought to go to hell.”

Maybe… but first, he’s heading to the unemployment office.