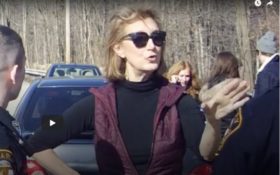 Showing off her gold commissioner’s badge and bragging about her political influence during a profanity-laced tirade at two police officers, a hotshot Democratic lobbyist with deep political connections bit off more than she could chew.

That behavior may work in the Washington, D.C. swamp — but it won’t work with beat cops.

Video of Caren Turner’s reaction to her daughter’s routine traffic stop over Easter weekend went viral on Tuesday — and it’s a distrubing glimpse into the contempt Democrats have for our police. Turner, who was formally a chairwoman of Hillary Clinton’s election finance committee, was swiftly fired from her position at the New York / New Jersey Port Authority after public outcry over her behavior.

In the video, Turner belittled the officers and demanded they tell her why her car was being pulled over and being impounded. She attempted to intimidate the two Tenafly officers with her political connections. She complained that their stop had “ruined” her holiday weekend and that she would be calling the police commissioner personally.

The officers didn’t flinch — and after the video was released following media requests, Turner was forced to resign as head of the Government and Ethics committee and Port Authority’s Operations committee.

“She demanded to be informed of what is going on and why they were stopped,”one of the officers wrote in his report. He said that Turner pulled out a Port Authority gold badge and identified herself as a commissioner, and that “based on her demeanor, the tone of voice, the way she was presenting herself and the way she was attempting to misappropriately use her professional position to gain authority in this situation, I advised her to speak with the driver of the vehicle for more information.”

“The Port Authority has zero tolerance for ethics violations,” a spokesman told NJ.com, who first reported on the story.

Turner is a top Democratic lobbyist that is shuttled between Washington, D.C. and her home in Tenafly, New Jersey, one of the wealthiest areas of the country. She was appointed to the high ranking Port Authority job after Democratic pressure on former Gov. Chris Christie to put more women in top positions.

Tenafly police had pulled over a Toyota for illegally tinted windows and plate violations, and then discovered the registration was expired. They ordered the car to be impounded. Turner’s daughter was involved and called her mother for help.

Turner arrived to the scene in a black Mercedes, and that’s when the fireworks started.

“I’m here as a concerned citizen and friend of the mayor. And what is the reason you pulled them over?” Turner tells police in the video when asked why she’s there.

“The driver has all the information,” the officer replies. “No no no no no, I need to know!” Turner replies.

She then demands the police refer to her as “commissioner” when they call her “miss.”

When the cops attempt to end the conversation, Turner goes nuclear. “You may not tell me when to take my child!” she screams at the officers. “You may shut the f*** up!”

You can see the shocking video below.

Warning: This will make your blood boil.