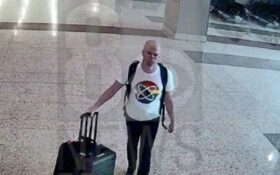 Sam Brinton was working at the U.S. Energy Department’s Office of Nuclear Energy as the Deputy Assistant Secretary of the Office of Spent Fuel and Waste Disposition… but now the nuclear official is facing two criminal charges after allegedly stealing luggage from airports.

Amid the charges, Brinton — the first gender non-binary person at such a high government position — has been fired from the Department of Energy.

“Sam Brinton is no longer a DOE employee,” a DEO spokesperson told The Daily Beast Monday. “By law, the Department of Energy cannot comment further on personnel matters.”

In Minnesota, felony theft is punishable by an equally large fine or as many as five years.

Prior to being fired, Brinton had been placed on leave.

The department added that it “takes criminal charges against DOE employees and clearance holders very seriously.”

“The Department is limited by law on what it can disclose on personnel matters, such as an employee’s clearance status,” the agency said. “Generally, as the Department has previously stated, if a DOE clearance holder is charged with a crime, the case would be immediately considered by DOE personnel security officials, and depending on the circumstances, that review could result in suspension or revocation of the clearance.”

As if that weren’t enough, Brinton has claimed to have survived gay conversion therapy, including a procedure involving needles and ice.

However, some reporters and even one therapist have long questioned Brinton’s backstory due to a lack of evidence. Since the luggage scandal, they’ve ramped up their criticisms.

“We write to respectfully demand the resignation of the Department of Energy’s Deputy Assistant Secretary of Spent Fuel and Waste Disposition, Sam Brinton, who was recently put on leave following felony theft charges,” wrote a team of more than 10 lawmakers, from Nancy Mace of South Carolina to Marjorie Taylor Greene of Georgia.

“We demand the resignation of Sam Brinton, and we implore you to set aside petty politics and appoint only the most qualified and dedicated individuals to influence America’s energy sector.”