You won't believe what the NY Times just printed... (DISGUSTING!) - The Horn News 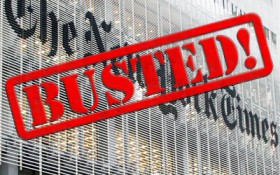 In a shockingly tone-deaf display, the New York Times has just published a horrific essay that fantasizes about the murder of the president of the United States.

Yes, in the same week a madman mails pipe bombs to political figures, The New York Times publishes stories about KILLING the president!

The essay by Zoe Sharp centers on a Russian agent sent to kill the president, who had been selected by Moscow and now “must be silenced.”

Trump isn’t named, but it’s immediately clear that’s who it is when the agent stalks him at one of “the president’s” own hotels.

When the agent’s gun misfires, there is no last-minute rescue. Instead, a Secret Service agent betrays the president, handing the Russian his own weapon to finish the job.

This sickening murder fantasy appears in the paper’s “Books” section, but it was not an excerpt from a current book or a literary review of disturbing political fiction already out there.

The newspaper tried to rationalize it with an explanation straight out of the elite media bubble, claiming that “one of the biggest stories out there” is the Russia investigation.

Never mind that most Americans are more concerned about jobs, trade, the economy, the election and border security. The Times has decided Robert Mueller is “one of the biggest stories out there.”

And rather than simply report on it, they also decided to ask “some of today’s most talented spy and crime novelists” to fantasize about “possible outcomes.”

Much of it is what passes for liberal comfort food these days: Trump is facing impeachment… Trump is stepping down… Trump is compromised by Russia… etc. etc. etc.

But Sharp’s story goes even further, presenting a scenario in which Moscow sends someone to kill the president, who is then betrayed by one of his own Secret Service agents.

Why in God’s name did you publish this, @nytimes? pic.twitter.com/CwflwI5vVd

"He sighted on the center of the president’s back, and squeezed the trigger."

White House Press Secretary Sarah Sanders told “Fox & Friends” that the story in the Times is “absolutely abhorrent and disgraceful.”

Yet the newspaper is stubbornly standing by it, telling Fox News in a statement:

“It’s very clear what this is: a work of fiction, commissioned by editors of the Book Review as part of a package of five stories penned by a range of spy and crime novelists — in the Halloween edition.”

The irony, of course, is that the Times has repeatedly used its heavy-handed editorials to slam Trump, demand he tone down his rhetoric, and accuse him of inciting violence.

Over the summer, the newspaper’s editorial board griped that “the only political leader who has been inciting and condoning violence has been Mr. Trump.”

The newspaper added that “at campaign rallies he fantasized about punching a foe in the face and urged his crowds to ‘knock the crap out of’ protesters, offering to pay their legal bills if they did.”

Columnist Bret Stephens in August warned that any violence against the media would be Trump’s fault.

“What should be clear is this: We are approaching a day when blood on the newsroom floor will be blood on the president’s hands,” he lectured.

It’s liberal media hypocrisy at its worst… right in the once-hallowed pages of The New York Times.