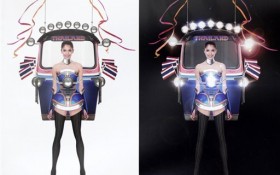 They’re iconic in Thailand, but does that make it a good outfit? The smoke-belching, ear-splitting, undisciplined rickshaws known as tuk-tuks are part of the chaos on Bangkok’s clogged streets.

Soon however, the tuk-tuk will stroll down a more refined runway, when Miss Thailand pays homage to her country at the Miss Universe 2015 pageant dressed as the iconic motorized rickshaw. Her outfit comes complete with headlights and handlebars.

The “Tuk Tuk Thailand” dress will be worn by Aniporn Chalermburanawong in the “national costume” round at the pageant in December in the United States. It was the winning design from 356 entries in a contest held by Miss Universe Thailand.

The Miss Universe Thailand organization announced the selection on its Facebook page, saying the outfit “has a metallic feel and look” that utilizes 3-D technology.

“The tuk-tuk dress will flash lights like a real tuk-tuk,” said Kaveerat Kunapat, a spokeswoman for Miss Universe Thailand. “It will be one of a kind.”

The outfit features an electric blue bustier and mini-skirt with thigh-high black tights — and a central headlight with handlebars just below the bosom. Attached to the costume is a backdrop of a tuk-tuk in Thailand’s national colors — red, white and blue — with six national flags, a dozen more headlights and an overhead banner that says: “Thailand.”

Kaveerat said a 5-member panel of judges that included fine arts professors, fashion designers and Miss Thailand herself wanted to break from the past style of traditional Thai silk dresses and present something “eye-catching but still representative of Thailand.”

Reviews of the dress were mixed. Some hailed it as unique and creative. Others cracked jokes, like one online commentator who said it looked more like an outfit from the “Transformers.” 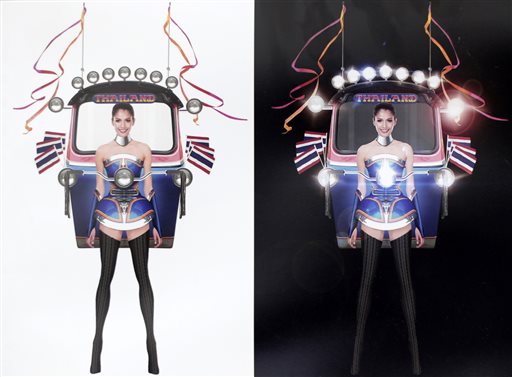