You won't believe the Kremlin's statement on Gorbachev - The Horn News 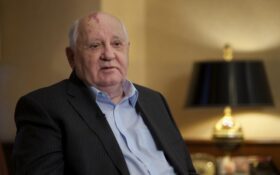 The Kremlin treaded carefully Wednesday while reacting to Mikhail Gorbachev’s death, praising his prominent role in reshaping 20th-century history, but noting his “romantic” view of the West.

The Kremlin’s ambivalence was reflected in the uncertainty about funeral arrangements. An iconic central venue chosen for Saturday’s farewell ceremony has been used for state funerals since Soviet times, but Russian media reported that Gorbachev won’t be given that honor.

The hesitant stance was mirrored by state television broadcasts, which paid tribute to Gorbachev as a historic figure but described his reforms as poorly planned and held him responsible for failing to safeguard the country’s interests in dialogue with the West.

The criticism echoed earlier assessments by Russian President Vladimir Putin, who has famously lamented the collapse of the Soviet Union as the “greatest geopolitical catastrophe of the 20th century.”

In a telegram of condolences released by the Kremlin, Putin praised Gorbachev as a man who left “ an enormous impact on the course of world history.”

“He led the country during difficult and dramatic changes, amid large-scale foreign policy, economic and society challenges,” Putin said. “He deeply realized that reforms were necessary and tried to offer his solutions for the acute problems.”

Kremlin spokesman Dmitry Peskov described Gorbachev as an “extraordinary” statesman who will “always remain in the country’s history,” but noted what he described as his idealistic view of the West.

“Gorbachev has given an impulse to ending the Cold War and he sincerely wanted to believe that it will be over and a new romantic period will start between the renewed Soviet Union and the collective West,” Peskov said. “Those romantic expectations failed to materialize. The bloodthirsty nature of our opponents has come to light, and it’s good that we realized that in time.”

Peskov wouldn’t say if Gorbachev would be given a state funeral and whether Putin would attend any ceremony held for the late Soviet leader.

While avoiding explicit personal criticism of Gorbachev, Putin in the past repeatedly blamed him for failing to secure written commitments from the West that would rule out NATO’s expansion eastward — an issue that has become a major irritant in Russia-West ties for decades and fomented tensions that exploded when the Russian leader sent troops into Ukraine on Feb. 24.

Leonid Slutsky, the head of the foreign affairs committee in the lower house, the State Duma, hailed Gorbachev as “the most remarkable politician of his time,” but described him as a “contradictory” figure whose reforms “played into the hands of those who were trying to wipe the USSR off the world’s map.”

Sergei Mironov, the leader of the Just Russia party, noted that Gorbachev “was like a breath of fresh air, embodying the hopes for colossal changes,” but added that his policies led to “the loss of a great country” and became a “tragedy for generations of Russians.”

Some others were far less polite.

Oleg Morozov, a member of the main Kremlin party, the United Russia, said that Gorbachev should have “repented” for the errors that hurt Russia’s interests.

“There is a mystical coincidence in Gorbachev passing away at a time when the special military operation in Ukraine,” Morozov said in remarks carried by the state RIA Novosti news agency. “He was a willing or an unwilling co-author of the unfair world order that our soldiers are now fighting on the battlefield.”

Nikolai Kolomeitsev, the deputy head of the Communist faction in the Duma, went even further, denouncing Gorbachev as a “traitor” who “destroyed the state.”

On another flank, Grigory Yavlinsky, the leader of the liberal Yabloko party, praised Gorbachev for “offering freedom to hundreds of millions in Russia, its neighborhood and half of Europe.”

“It’s our responsibility how we in Russia have used that freedom, that great opportunity,” he said.

Imprisoned Russian opposition leader Alexei Navalny said that he learned about Gorbachev’s death from prison radio, adding sarcastically that “it perfectly reflects a sharp turn the country has made.”

“Gorbachev has remained one of the very few who didn’t use power and the opportunities it offered for personal gain,” he said on his messaging app channel. “I’m sure that our ancestors will have a far more favorable view of his life than his contemporaries.”

Dmitry Muratov, last year’s Nobel Peace Prize winner who served as the editor of Russia’s top independent newspaper Novaya Gazeta until it shut under official pressure in March after the Kremlin sent troops into Ukraine, praised Gorbachev as a man who put an end to the war in Afghanistan, released political prisoners and ended the Cold War-era arms race.

“He even told me once that he refused to press a nuclear button even during an exercise,” he said.

Gorbachev’s aides were devastated by the loss.

“His fearlessness in the initiatives, the changes that he started in this country, our country, in the Soviet Union, in Russia, predetermined the irreversibility of many of these changes,” said Pavel Palazhchenko, who worked as Gorbachev’s official interpreter during his tenure as the Soviet leader and then worked for Gorbachev’s foundation.

“Not everything was successful, of course, to our great regret, much was trampled on,” he told The Associated Press. “But I think that this was the project that will definitely be revived.”

Vladimir Polyakov, Gorbachev’s press secretary for three decades, described working alongside him as “the best years.”

Gobachev will be buried on Saturday at Moscow’s Novodevichy cemetery next to his wife. Gorbachev’s foundation said that a farewell ceremony will be held at the Pillar Hall of the House of the Unions, a historic mansion near the Kremlin that served as the venue for state funerals since Soviet times.

The Kremlin said that no decision has been made yet on funeral arrangements, but the Interfax news agency reported that Gorbachev won’t be given a state funeral.