Yes, the 2020 Oscars got political again - The Horn News 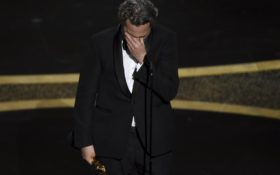 Hollywood stars gathered once again for the 92nd Academy Awards ceremony on Sunday night — and turned the event into a political rally.

The night saw many firsts — including an International film winning Best Picture for the first time ever and a woman became the first to win the Best Score category in 23 years.

But as many firsts as there were, some things noticeably didn’t change.

The 2020 Oscars were once again political as ever.

Two stars in particular — Joaquin Phoenix and Brad Pitt, who both earned wins in their respective categories — both felt they had messages for the world.

Phoenix’s visceral portrayal of a troubled man’s descent into villainy in “Joker” earned him his first Oscar in a career that has seen personal and professional highs and lows.

In his strange rambling remarks, Phoenix also addressed gender and ethnic inequality and even the treatment of dairy cows, a reflection of his longtime veganism.

An emotional Joaquin Phoenix concludes his acceptance speech by remembering his brother River Phoenix: "When he was 17, my brother wrote this lyric. He said, 'Run to the rescue with love—and peace will follow.'" https://t.co/8kz7m5vtnF #Oscars pic.twitter.com/rg89eYCyLK

He wrapped it all in hopeful words, both his own and those of his late brother, actor River Phoenix.

“Human beings at our best are so inventive and creative and ingenious. I think when we use love and compassion as our guiding principles we can … create systems of change beneficial to all sentient beings and the environment,” Phoenix said. “When he was 17, my brother wrote this lyric: ‘Run to the rescue with love, and peace will follow.’”

He was in a bit of a daze with tears in his eyes when he walked offstage. Looking down at his Oscar he asked, “Whose is this?”

“It’s yours,” said the woman escorting him out. He declined to come backstage and field media questions, as is customary for winners.

An emotional Brad Pitt won his first acting Oscar on Sunday night, claiming the supporting actor trophy for “Once Upon a Time … in Hollywood,” while referencing his own storied run in the industry where he is among the most famous and revered.

He turned serious at the Oscars, mentioning former national security adviser John Bolton, who Democrats wanted to testify during the impeachment hearings of President Donald Trump. “They told me you only have 45 seconds up here, which is 45 seconds more than the Senate gave John Bolton this week.”

You can view his speech below:

Brad Pitt: "They told me I only have 45 seconds up here—which is 45 seconds more than the Senate gave John Bolton this week." https://t.co/A8YBbWjv9z #Oscars pic.twitter.com/Dv7c3njgDA

He was honored for his role as Clint Booth, a stunt double for Leonard DiCaprio’s actor character in the film about the Manson family murders that shot at locations in Hollywood near the Dolby Theatre, where Pitt accepted the first award of the evening.

“I’m not one to look back but this has made me do so and I think of of my folks taking me to the drive-in to see ”Butch and Sundance,” and loading out my car and moving here,” he said, choking up. “… to all the wonderful people I’ve met along the way, to stand here now: ‘Once upon a time in Hollywood.’ Ain’t that the truth.”

Pitt was a heavy favorite throughout this awards season, giving funny speeches while collecting trophies at the Golden Globes and SAG Awards. Even co-star Margot Robbie was humorous in serving as his proxy at the BAFTAs.

In earlier speeches, Pitt joked about DiCaprio and director Quentin Tarantino, and via Robbie zinged Brexit and Prince Harry and Meghan Markle’s departure from their royal roles in Britain. He mocked himself as well, joking about his personal life and wearing a name tag to the Oscar nominees luncheon.

Pitt acknowledged backstage that he’d had some speech writing help along the way.

“Historically, I’ve always been really tentative about speeches, they make me nervous,” he said. “So this round, I figured if we’re going to do this I’d put some real work into this trying to get comfortable. This is the result of that. I have some very, very funny friends that helped me with some laughs. It’s got to come from the heart.”

The 56-year-old Pitt, who grew up in Springfield, Missouri, first gained widespread attention in the 1991 film “Thelma & Louise,” where his love scene with Geena Davis initially defined him as a sex symbol.

Pitt’s ex-wife, Angelina Jolie, won a supporting-actress Oscar in 1999 — years before she and Pitt got together. They share six children, to which he dedicated his award: “This is for my kids, who color everything I do. I adore you,” he said onstage.

The other nominees for supporting actor were Hanks of “A Beautiful Day in the Neighborhood,” Hopkins for “The Two Popes,” and Pacino and Pesci for “The Irishman.”

Hanks was last nominated 19 years ago, while it had been 22 years for Hopkins, 27 years for Pacino and 29 years for Pesci. Pitt was the only man in the category who had never won an acting Oscar.

“It has been a really special run,” Pitt said backstage. “I think it’s time to go disappear for a little while now and get back to making things.”