Nancy Pelosi could go to jail for 20 years... - The Horn News 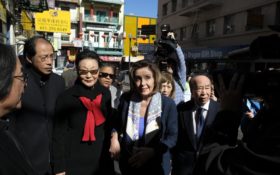 Speaker of the House Nancy Pelosi may have really done it this time.

Pelosi used to be a left-wing outlier on the floor of the House of Representatives — but her party went so far left, it left her in charge of the biggest house in Congress.

As Speaker, one of her main duties is raising money — and it may drive her right into prison.

Pelosi may have ripped off her poorest, most loyal followers dozens upon dozens of times this year, according to a new investigation.

Pelosi promised the throngs of liberals on her email list that, if they would just send her a donation, she would match every dollar out of her own pocket.

The problem is, she never spent a single dime!

Still, the messages went out and the checks came in. “This is so critical, I’m personally 4x-matching all gifts for these final 24 hours,” Pelosi wrote in one of these emails to her closest followers.

That means even her own hardcore progressive constituency is getting sick of her money-grubbing tricks. After all, this didn’t just happen once. Axios combed through a political email archive maintained by researchers at Princeton University, and found Pelosi’s campaign, “Nancy Pelosi for Congress sent at least 50 fundraising emails from January through March” of this year.

The latest one went out this Wednesday.

Her followers sent back $4 million in the first quarter of this year, mostly in small donations, and she looked like she was on top of the world.

But then Axios looked at Federal Election Commission records — and the whole scam fell apart.

“Pelosi did not donate any personal funds to her campaign during the first quarter, nor has she ever done so,” Axios reported this week. That’s right. FEC records show that Pelosi has never spent a single dollar of her own money running for office, no matter what she told her gullible email subscribers.

“Donation-matching is one of a number of popular fundraising gimmicks, yet critics say that in most cases, it’s doubtful any actual matching occurs,” according to Axios. “The offer of matching funds can be an attractive option for wealthier candidates such as Pelosi and former President Donald Trump in an effort to raise funds,” according to the Daily Caller.

Pelosi has a net worth of $115 million last year, according to OpenSecrets.org.

Popular or not, it could be fraud — and that could mean spending the rest of her life behind bars.

A candidate can only send out an email promising to match people’s donations “if it’s true,” attorney and campaign finance expert Jan Baran told Campaigns & Elections.

“But usually fundraising professionals who send out that type of message know it’s not true, and if you intentionally misrepresent something to take somebody’s money away from them that’s going to be fraud.”

Under the law, it’s illegal to try to obtain “money or property by means of false or fraudulent pretenses, representations, or promises,” whether they are transmitted by “any writings.” Anyone found guilty “shall be fined under this title or imprisoned not more than 20 years, or both.”

Where does that leave Nancy Pelosi?

Possibly in the slammer for a decade or two.

Pelosi poses as a left-wing crusader, but she’s watched her private wealth grow year after year. Even though her congressional salary is generous, it’s not the kind of pay that can make you worth nine digits.

How did she get her money?

She claims to be a straight talker…but she lied 50 times this year to shake down her own donors.

And she constantly says that Donald Trump is on the verge of going to jail for financial chicanery — just like the kind she seems to practice herself.

Maybe she’s so eager to talk about Trump, because she’s whistling past the metaphorical graveyard herself?