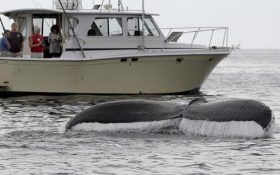 Police in New Jersey say a yacht hosting a high school senior prom rear-ended another yacht on the Hudson River near Hoboken, and no injuries were reported.

Both boats were damaged in the crash, which caused the prom to end early. Staff, administrators and students were bused to an Elks Lodge following the crash.

It wasn’t clear if anyone was aboard the smaller boat at the time of the crash.

The district’s superintendent says every effort will be made to hold another prom before graduation.