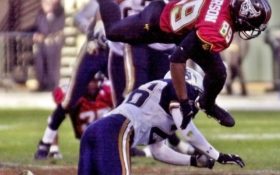 The Los Angeles Wildcats and New York Guardians will be among the teams taking the field when the XFL returns in February.

The league revealed the logos and names Wednesday for its eight teams, which will also include the DC Defenders, Dallas Renegades, Houston Roughnecks, St. Louis BattleHawks, Seattle Dragons and Tampa Bay Vipers.

The reveal was done during a presentation on the XFL website that was also on the ESPN and Fox Sports websites.

The league announced in 2017 that it was coming back after it went one season in 2001 before shutting down.

The XFL recently signed former Oklahoma and Pittsburgh Steelers quarterback Landry Jones as its first player and had a session in California with coaches to go over rules.