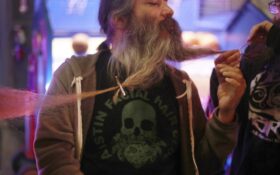 Facial hair enthusiasts claimed to have set a new world record for longest beard chain during an event in Wyoming on Friday, the Casper Star-Tribune reports.

Participants gathered at Gaslight Social, a bar in Casper, where they stood side by side and clipped their beards together to create a hairy chain that was measured at 150 feet long, according to the newspaper. That’s more than double the Guinness World Record of 62 feet, 6 inches, set in Germany in 2007.

To participate, people needed to sport a beard at least 8 inches long, according to the Star-Tribune.

The event occurred on the sidelines of the National Beard and Moustache Championships, which took place Saturday at the city’s Ford Wyoming Center.