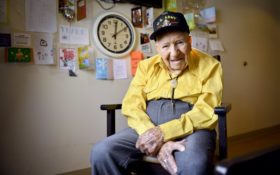 When John Frey’s family requested 101 birthday cards to celebrate the World War II veteran’s 101st birthday in Utah, they were expecting to get 500 at most.

At a celebration on June 8, a day after his birthday, Frey ended up with well over 5,000 cards, the Daily Herald reports.

According to the report, Frey’s request spread quickly after The Associated Press picked up the story from the Daily Herald in May and it appeared in news outlets across the country.

The cards came from all 50 states and at least 12 countries. Entire classrooms of children, military veterans and Utah’s elected officials wanted to wish the former mechanic/machinist for the U.S. Army a happy birthday.

Frey said he had not expected to ever get so many cards.

Jeanne Waters, the front desk receptionist at the Mervyn Sharp Bennion Central Utah Veterans Home where Frey lives, said she had to ask the Postal Service for an extra tub just to sort his cards every day.

“These have been overfilled with letters and packages and everything for him,” Waters said. “It’s been fun. It really has.”

Frey celebrated with family and friends last week at home. His daughter Janice Carlson helped him use a letter opener to open one envelope including a sea shell and a note. “Holy mackerel!” Frey exclaimed after opening another card that played music.

Carlson said they are going to load up his room with as many cards as they can, but it will take a few days to open them all.

The excitement has been a bit tiring, Frey added.

“I just want to get in my car and take off for a while,” said Frey, who lived in his own home until he was 100 and enjoys going for drives in his car.