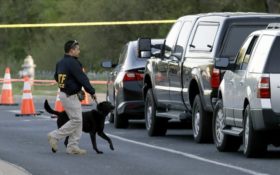 Hundreds of people in northwest Poland have been evacuated for a few days to allow Navy sappers to neutralize a British World War II giant Tallboy bomb resting under a waterway leading to the port of Szczecin.

The 5.4 ton bomb was found in Sept. 2019 during work to deepen the waterway. It’s located on the southern edge of a popular Baltic Sea resort of Swinoujscie, that, like Szczecin, was a busy Nazi Germany military port during the war.

In a defusing project that began Monday and is expected to last for five days, experts will be seeking to neutralize the Tallboy underwater by causing its explosives to burn out in a controlled way.

It is believed to be the first such underwater operation on a Tallboy, which have previously been neutralized on land in Germany, Norway and France.

Because of the risk to their lives, over 750 residents within 2.5 kilometers (1.6 miles) of the bomb had to evacuate for the duration of the operation and a nearby ferry service was suspended.

The Tallboy bomb was designed by British aeronautical engineer Barnes Wallis and was used by the Royal Air Force to destroy large Nazi-controlled objects though underground shocks.

The one in Swinoujscie was probably used in April 1945 on the Nazi German battleship Luetzow. Experts from the 12 Division of Balers in Wolin have currently no explanation of why it did not explode then.