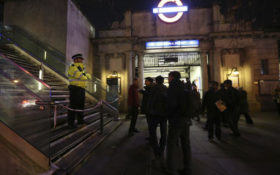 Britain’s Royal Navy has removed a suspected World War II bomb whose discovery in the River Thames shut down a chunk of central London.

The Metropolitan Police force says that officers were called Thursday afternoon “to reports of suspected World War II ordnance in the river” near the Houses of Parliament.

Police cordoned off roads in the area and closed two bridges over the river. Nearby Westminster subway station also was shut.

London was heavily bombed by Nazi Germany during the war, and unexploded munitions are still sometimes found.