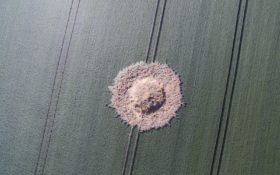 A crater 10 meters (33 feet) wide and 4 meters (13 feet) deep has appeared in a field in central Germany, apparently caused by a World War II bomb exploding in the middle of the night.

Police said Monday that the crater was discovered on Sunday afternoon near Limburg and there was no indication it was caused by farm machinery or other tools. Residents reported having heard a loud explosion and felt a blast in the early hours of Sunday.

No one was hurt. News agency dpa reported that police said the shape of the crater, among other factors, led explosives clearance experts to confirm it was created by a bomb.

More than 70 years after the end of the war, unexploded bombs are still found frequently in Germany.