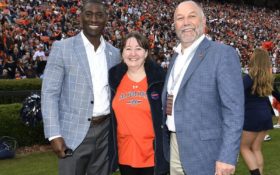 A 47-year-old Englishwoman has seen the best and worst that Twitter would have to offer the American football player who shares her name.

Dee Ford, of Kent, England, told the Kansas City Star that her “phone was going off literally nonstop” due to angry tweets from Kansas City Chiefs fans who thought they were venting at linebacker Dee Ford following his critical late penalty in last weekend’s AFC Championship loss to the New England Patriots.

The player isn’t on Twitter, but he was no stranger to the Englishwoman.

Five years ago when the player was still at Auburn, someone in the school’s athletic department inadvertently tagged the woman in a congratulatory tweet after the player was named most valuable player of the senior bowl. Fans responded with their own positive tweets.

She decided to learn about the game and was hooked. She has spoken to the Chiefs’ Dee Ford by phone and attended two games — an Auburn home game last fall and a Chiefs game in London in 2015.