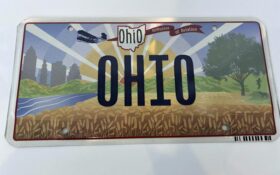 Ohio’s debut of its new license plate failed to take off — because a banner depicted on the plate was attached to the wrong end of the Wright Brothers’ historic first plane, the Wright Flyer.

The new license plate illustrates rays of sunlight beaming into the sky, with a banner that reads “Birthplace of Aviation” draped across the horizon. But the banner, which should have been trailing behind the plane, was attached to its front.

After the unveiling, Ohio officials said in a statement that they were aware of the mishap and it would be corrected to show the banner trailing the plane before Ohioans upgrade their plates.

Ohio isn’t the only one who has made this flighty error. The front of the Wright Flyer can easily be mistaken for its back because the plane’s propellers were located at the back, instead of the front.

The plates are expected to land on the market Dec. 29.