Wow! Trump wants THIS many troops to guard the Mexican border - The Horn News 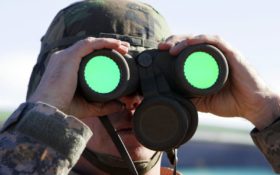 President Donald Trump said Thursday that he wants to send between 2,000 and 4,000 National Guard members to the U.S.-Mexico border to help federal officials fight illegal immigration and drug trafficking, but it wasn’t clear who would be called up or if they would even be allowed to carry guns.

Trump’s comments to reporters on Air Force One were his first estimate on guard levels he believes are needed for border protection. It is lower than the 6,400 National Guard members that former President George Bush sent to the border between 2006 and 2008.

Trump said his administration is looking into the cost of sending the troops to the border and added “we’ll probably keep them or a large portion of them until the wall is built.”

“We are going to do it as quickly as we can do it safely,” Vitiello told Fox News Channel.

He said that guard members would be placed in jobs that do not require law enforcement work, an apparent reference to undertaking patrols and making arrests.

The Republican governors of Arizona, New Mexico and Texas have backed the deployment but it was unclear Thursday how Democratic California Gov. Jerry Brown would respond to Trump’s call.

Brown’s office repeatedly referred requests for comment to the California National Guard, which said the state first must be informed where money for the deployment would come from, how long it would last and clearly define the operation’s objectives.

In Washington, Marine Lt. Gen. Kenneth F. McKenzie told reporters at the Pentagon that it has not yet been determined how many, if any, of the troops in the border security operation will be armed.

Trump ordered the deployment because “we are at a crisis point” with illegal immigration, Secretary Kirstjen Nielsen of the Department of Homeland Security said.

“We’d like to stop it before the numbers get even bigger,” she said.

Nielsen said guard members would provide support to border officials, “help look at the technology, the surveillance, in some cases we’ll ask for some fleet mechanics” and free up agents trained in law enforcement for other duties.

Arrests along the U.S. border with Mexico jumped to 50,308 in March, a 37 percent increase from February, and more than triple the same period last year. Border arrests rose 10 of the last 11 months after falling in April 2017 to the lowest since the Department of Homeland Security was created in 2003.

In Mexico, the country’s politicians condemned Trump’s deployment decision and Mexico’s Senate passed a resolution Wednesday calling for the suspension of cooperation on illegal immigration and drug trafficking in retaliation.

In 1997, camouflage-clad U.S. Marines ordered to patrol the border for drugs in West Texas shot and killed 18-year-old Esequiel Hernandez Jr. while he was herding his family’s goats near the tiny village of Redford, Texas, along the border.

That shooting sparked anger in the region and ended the President Bill Clinton-era military presence along the international line.

Their presence was especially felt in Palomas, Mexico, a smuggling hub south of the village of Columbus, New Mexico, where the increased presence and equipment was credited with easing illegal northbound immigrant travel.

Those troops worked on intelligence, surveillance and reconnaissance support, analysis and training, and support efforts to block drug trafficking.

They temporarily supplemented Border Patrol agents until Homeland Security could recruit and train additional officers and agents to work on the border. While some were armed for their own self-defense, they were not authorized to make arrests.

During the last two border deployments, the guard’s supporting role was criticized by some people who thought they should be more involved in enforcement.

There are now more than 20,000 Border Patrol agents along the U.S.-Mexico boundary and Trump wants to add 5,000 more to the force’s currently funded level of about 21,000.

Guard members sent to the border to help don’t always come from border states. Some of the first sent under Bush’s two-year deployment were from Utah.

Democratic Gov. Kate Brown of Oregon said she would not send troops if asked because she is “deeply troubled by Trump’s plan to militarize our border.” And Republican Vermont Gov. Phil Scott said he “would not be eager” to send troops because so many other states are closer to the border with Mexico.

Arkansas Gov. Asa Hutchinson, a Republican, said he would be willing to send National Guard members to the border “who are experienced and who have done that before.”

Montana Gov. Steve Bullock, a Democrat, said he would never deploy National Guard troops “based simply on the whim of the President’s morning Twitter habit.”

A fifth-generation Arizona rancher who is an outspoken supporter of Trump’s border wall said he was “absolutely elated” by the president’s National Guard deployment plans.

When Bush deployed troops “there was no traffic by drug packers and immigrants,” he said. “The problem for the National Guard guys now is that they will die of boredom because the Sinaloa Cartel will know where they are and won’t send their drug packers through.”