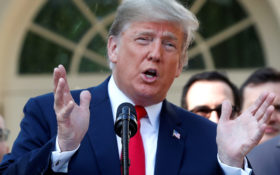 With special counsel Robert Mueller’s controversial probe into Russian election interference in his rearview window, President Donald Trump is eager to get back to the work at hand.

His goal: Make America great again. And he’s reaching out to some unlikely political rivals to get it done.

According to the White House and senior Democratic officials, Trump reached out to Senate Minority Leader Chuck Schumer and House Speaker Nancy Pelosi quietly on Apr. 4.

He wants to meet to discuss a bipartisan solution to rebuilding America’s crumbling infrastructure. He also wants the Democrats on board with his plan to get prescription drug prices under control.

Schumer and Pelosi agreed, and the Democratic Party bosses are scheduled to meet with Trump at the White House on Apr. 30 at 10:30 a.m. EDT.

“We’ll be meeting with the president next week when we come back to talk about what the prospect is for the size in terms of resources and scope of what that might be,” Pelosi said in announcing the meeting.

She said that infrastructure and prescription drug prices are two areas where she and Schumer would be willing to follow Trump’s lead.

Republican and Democrats have all said they would like to strike a bipartisan deal, though they’ve struggled with coming up with ways to pay for the new spending. Once the Mueller probe wrapped up, Trump reached out.

The president had warned earlier this year that Democrats could choose legislative cooperation or investigations, but couldn’t do both.

Now that the Mueller probe is done, Trump is willing to meet and hash out a potential deal to rebuild American roads and infrastructure.

It’s up to Pelosi and Schumer whether they follow his lead — or turn the bipartisan gesture into another bitter political fight.

FLASHBACK: Nancy Pelosi SPITS IN THE FACE of Ocasio-Cortez