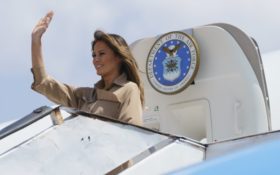 First Lady Melania Trump spent Easter Sunday in Mar-a-Lago with President Donald Trump — and it was the happiest Easter in a long time, her spokeswoman said.

A “weight has been lifted” off the first family after the conclusion of special counsel Robert Mueller’s probe.

Instead of focusing on a so-called “witch hunt” targeting her husband, Melania was able to devote her full energy to her duties as the first lady.

And it’s a huge relief.

“It was all very ridiculous,” Melania’s spokeswoman, Stephanie Grisham, told Fox News on Monday. But now, “It’s great, we were down at Mar-a-Lago with the president and fast lady. A good mood and spirit.”

Now, she is focusing her work on the “Be Best” campaign to help stop childhood bullying, as well as Monday’s traditional Easter Egg Roll.

“New activities that we are really excited for that go in line with her ‘Be Best’ campaign,” Grisham said. “‘Be Best’ hopscotch for the kids. ‘Be Best’ musical eggs that will be really fun. It’s going to be a great day.”

The president and first lady will take part in the traditional egg roll, and then color greeting cards with children that will be sent to U.S. troops deployed overseas.

The 141st annual Easter Egg Roll will be held on the White House lawn on Monday. The tradition dates back to 1878 and the administration of former President Rutherford Hayes.

You can watch all the events live here —