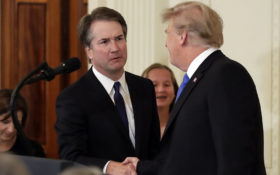 Supreme Court nominee Brett Kavanaugh isn’t backing down from the accusations leveled against him — and neither is the White House.

Kavanaugh and one of his accusers, Dr. Christine Baisley Ford, are set to appear before the Senate Judiciary Committee on Thursday to cap one of the most contentious Supreme Court confirmation fights in U.S. history.

They may not be alone. In a surprising twist on Tuesday, the White House announced it would also allow a second Kavanaugh accuser appear, too.

White House Press Secretary Sarah Sanders said that President Donald Trump “would be open” to Deborah Ramirez, a second woman accusing Kavanaugh of misconduct, testifying and that the “process could take place on Thursday.”

She added that Trump “has said a number of times these individuals should be heard.” At the same time, she noted that Kavanaugh has been “unequivocal in his denial” of sexual assault allegations and defended his reputation.

“This is a country where you’re innocent until proven guilty…. except when you’re a conservative Republican,” Sanders said.

Kavanaugh himself said Monday he won’t let “false accusations drive me out of this process” as he, Trump, and top Republicans mount an aggressive drive to rally the public and GOP senators behind his nomination.

Trump and Republican leaders accused Democrats on Monday of a smear campaign by using accusations by two women of sexual misconduct by Kavanaugh in the 1980s to try scuttling his Senate confirmation. The nominee took the unusual step of defending himself in a Fox News interview that underscored the GOP’s new-found combativeness.

Kavanaugh, 53, said that he wasn’t questioning that his initial accuser, psychology professor Christine Blasey Ford, may have been sexually assaulted in her life. But he added, “What I know is I’ve never sexually assaulted anyone.”

On Monday, Trump called the accusations among “the single most unfair, unjust things to happen to a candidate for anything.” Senate Majority Leader Mitch McConnell, Republican, angrily accused Democrats of slinging “all the mud they could manufacture” and promised a full Senate vote soon, but specified no date.

Senate Democratic leader Chuck Schumer of New York retorted that if McConnell believed the allegations were a smear, “why don’t you call for an FBI investigation?” He accused Republicans of “a rush job to avoid the truth.”

Despite the forceful rhetoric by Kavanaugh and his GOP supporters, it remained unclear how three moderate Republicans — Sens. Susan Collins of Maine, Arizona’s Jeff Flake and Alaska’s Lisa Murkowski — would react to the latest accusation. With the GOP’s Senate control hanging on a razor-thin 51-49 margin, defections by any two Republican senators would seal his fate if all Democrats vote “no.”

Proceeding with Kavanaugh seems to give Republicans their best shot at filling the Supreme Court vacancy — and giving the court an increasingly conservative tilt — before November’s elections, when GOP Senate control is in play.

Delaying Kavanaugh’s confirmation could allow time for doubts about him to take root or any fresh accusations to emerge.

During the Fox interview, Kavanaugh said that while there were high school parties with beer and he wasn’t perfect, “I’m a good person. I’ve led a good life.” He said he’d never done anything like the episodes his accusers have described and said he didn’t have sexual intercourse until “many years” after high school.

On Sunday, The New Yorker magazine reported that Ramirez described a 1980s, alcohol-heavy Yale dormitory party at which she said Kavanaugh acted inappropriately.

With increasing intensity, Republicans have attacked the credibility of Ford’s and now Ramirez’ accounts. They note that neither the accusers nor news organizations have found people willing to provide corroboration, and every single person named by the two women have denied any memories of the incidents.

Who do you believe?