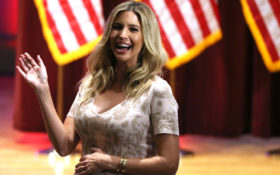 If you’re tuned into the media, it appears that the Ivanka Trump brand is in a serious downward spiral and is being dropped by retailers left and right.

Unfortunately for liberals, that’s not true. Ivanka’s brand is, in fact, souring — thanks to thousands of her supporters.

And in a statement emailed to The Associated Press late Friday, Rosemary K. Young, senior director of marketing at Ivanka Trump, said that the brand continues to expand across all categories and distribution, resulting in “significant” revenue growth last year compared to the previous year.

While Nordstrom, Sears, and Kmart have taken nasty political stances and claimed to have removed the First Daughter’s products from their stores, the brand seems to be doing just fine.

The move by retailers comes amid a social media campaign called “Grab Your Wallet,” urging a boycott of stores that stock Ivanka Trump or Donald Trump products.

But it’s clear the effort is failing.

“The women behind the brand represent a diverse group of professionals and we are proud to say that the Ivanka Trump brand continues to embody the principles upon which it was founded,” said Young in the statement.

Since supporters have rallied behind Ivanka, retailers have quietly backed off.

Despite Nordstrom saying in early February it would stop selling Ivanka Trump clothing and accessories, an unnamed spokesperson for the brand has since contradicted that statement. Instead, the spokesman said that Nordstrom did order both shoes and clothing for spring and moved forward with the purchase of clothing.

Sears and Kmart said they have evicted a number of Trump-branded items from their online stores, but in the face of criticism wouldn’t specify how many — and emphasized that hundreds of products are still available through their third-party online marketplaces.

Ivanka Trump announced earlier this month that she would take a leave of absence from her clothing and accessories business as well as the Trump organization.

But it seems even in her absence, her fans are eager to see the brand continue to profit and succeed.

— The Horn News and The Associated Press contributed to this article.