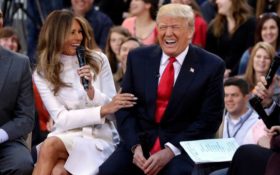 Liberals have long been abusing the courts to end-run around our elections and block the clear choice of the voters on just about every major issue.

Now, one federal judge has had enough.

Attorneys for Common Cause, a Democrat-aligned group, said the investigation must be stopped by court order because the panel could somehow snatch up voter information even if the states refuse to provide it.

But Judge Lamberth wasn’t having it.

“That’s hard to keep a straight face,” he shot back, according to The Washington Times.

Then, the judge called them out for attempt to pull an ugly little stunt.

He had wanted to see a transcript of the voting commission’s July 19 meeting, where panelists including co-chair Kris Kobach discussed what they were requesting and how it would be used.

Pretty simple stuff right? Since it’s all on-the-record and official, it should not only be easy to obtain, but they should also be able to point out what exactly was said that would suggest they’re up to no good and need to be stopped by a district court.

Instead, they tried to use bits and pieces of interviews Kobach has given.

The judge quickly shot them down.

In other words: Stick to the facts!

The judge said the only thing that matters is not what Kobach has said over time, but what the panel itself is actually doing.

And while he called some of its record requests “snooping,” Lamberth also noted that the panel isn’t asking for private data, and it’s not engaging in a manhunt for voters, illegal or otherwise.

They’re asking for the same publicly available information that ANY American would be able to get with a records request.

The states weren’t even ORDERED to do anything, as the left has implied; they were simply asked – a fact that wasn’t lost on this level-headed jurist.

“No states have been compelled to do anything,” Lamberth, an appointee of President Ronald Reagan, pointed out.

As a result, he denied Common Cause a restraining order that would’ve handcuffed the panel and blocked its most basic function… all because it’s seeking publicly available information for its investigation.

An analysis of this data could reveal some patterns such as people who may be registered to vote in two places, people on the rolls who may be ineligible to vote and/or dead people who somehow keep turning up at the ballot box every year.

It’s the starting point for any investigation into potential voter fraud, yet the left is fighting tooth and nail against it and multiple states have flat-out refused to help.

You have to wonder why… and if you do, you’re not alone.

“If any state does not want to share this information, one has to wonder, what they are worried about?” President Trump asked during a commission meeting last month. “There’s something, there always is.”