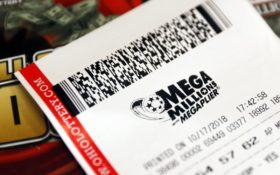 A California lottery ticket worth $530 million in the Mega Millions draw was sold at a liquor store in San Diego.

The winner of Friday’s drawing will have to decide whether to receive the estimated $530 million jackpot in 30 installments or its $345.2 million cash value.

The California State Lottery says a ticket with five winning numbers — but missing the Mega number — was sold at a gasoline station in Seal Beach and is worth $1,143,154.