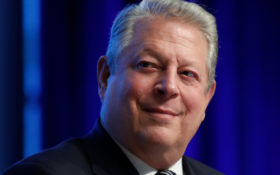 If you’re a hostile nation peddling anti-American propaganda, you know exactly who will help you get your message out: Trump-hating liberals.

With heroes like Ilhan Omar, Alexandria Ocasio-Cortez, and Rashida Tlaib, left-wingers are pro-terror regimes’ natural allies — and they’re getting the message out thanks to former Vice President Al Gore.

A repressive Islamic country and the American Left are working together to make America-shaming videos go viral — and Gore is cashing in on it, big time!

Al Jazeera, which is financed by Qatar’s royal family, played videos by the 9/11 hijackers and aired messages from Osama bin Laden after 9/11.

The network literally threw an on-air birthday party for Hezbollah terrorist leader Samir Kuntar, who had been imprisoned by Israel for killing a four-year-old girl.

But the Dohar-based media empire got wise when it realized Millenial hipsters hate Red State America — and is harnassing their hate.

They even based it in San Francisco at first. And it worked.

The website “AJ+” regularly racks up thousands of Facebook shares and retweets for its Hate America propaganda videos.

Qatar uses the stories to try to divide Americans against each other and undermine our determination to fight our enemies.

To do that, AJ+ spends millions getting liberals to think America is hell on earth: The economy is in the toilet, the Trump administration is stomping all over human rights, and racism, sexism, and “transphobia” are absolutely everywhere.

But that isn’t exactly the truth—in America or Qatar.

For example, AJ+ released a video shaming the state of Alabama for passing the Human Life Protection Act to end most abortions in the state. But it forgot to mention that abortions are totally illegal in Qatar unless the pregnancy threatens the mother’s life.

“Regarding women’s rights, Qatar is hardly a beacon of light,” according to a special report in The Jerusalem Post. The country imprisons “women who get pregnant outside of marriage and lashing them 100 times if they are Muslim.”

AJ+ zings the Trump administration for violating the “rights” of illegal aliens at the border — a line that’s always sure to earn shares and retweets in left-wing newsfeeds.

The foreign outlet has the guts to criticize U.S. “racism” even though Qatar didn’t outlaw slavery until 1952 and only gave 800,000 African slaves citizenship in 1961.

“Up to 90 percent of Qatar’s population is composed of noncitizens,” according to Freedom House—but it wouldn’t make any difference if every Qatari could vote, because its rulers made sure elections don’t matter.

The ruling family in Qatar, the country behind AJ+, “maintains a monopoly on political power, and the system excludes the possibility of a change in government through elections.”

How did these Dark Age fanatics get a foothold on America’s left-wing market?

The former vice president started a leftist video station called Current…but he wasn’t any more successful at that than he was in running for president.

So, he sold his TV channel to Al Jazeera in 2013 for half-a-billion dollars — and Gore pocketed a cool $100 million on the deal.

“Al Jazeera was founded with the same goals we had for Current,” said Gore’s partner, Democrat ambulance-chasing lawyer Joel Hyatt. “Al Jazeera, like Current, believes that facts and truth lead to a better understanding of the world around us.”

According to Hyatt, Democrats and pro-terrorists share the same set of “facts.”

If that wasn’t clear enough, Al Gore backed  Al Jazeera, too. He said Current and AJ both want “to give voice to those who are not typically heard; to speak truth to power; to provide independent and diverse points of view, and to tell the stories that no one else is telling.”

Gore gave terrorist fanatics their own TV channel on U.S. cable, and a platform on social media, and made $100 million in the process.

Thanks to Gore’s sweet corporate deal—what would AOC say about that?—America dug itself deeper into the pit of fake news.

A whopping 68 percent of Americans say fake news is shaking their confidence in their government. As a matter of fact, U.S. citizens consider phony news stories a bigger threat than racism or sexism.

The Democrats claim the biggest threat to life on earth is Russian twitter bots and content farms in Macedonia.

But they’re spinning the web of foreign-influenced lies that are tearing our country apart.

Leftists are the willing tools of foreign intelligence because they both hate America — and everything it stands for.

Their lies have to be stopped. The Constitution hangs in the balance. Help us share the truth today.