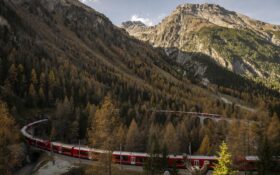 A Swiss railway company claimed the record for the world’s longest passenger train Saturday with a trip on one of the most spectacular tracks through the Alps.

The Rhaetian Railway company ran the 1.9-kilometer-long (1.2-mile-long) train composed of 100 coaches along the Albula/Bernina route from Preda to Berguen.

The route was designated a UNESCO World Heritage in 2008 and leads through 22 tunnels, some of which spiral through mountains, and across 48 bridges, including the curved Landwasser Viaduct.

The entire journey took over an hour. Rail enthusiasts lined the valley to watch the train’s 25 sections wind their way about 25 kilometers (15.5 miles) through the Alps.

Rhaetian Railway director Renato Fasciati said the record attempt was intended to highlight some of Switzerland’s engineering achievements and to celebrate 175 years of Swiss railways.