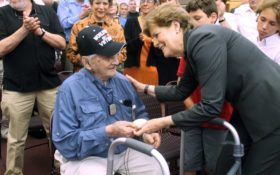 A 98-year-old World War II intelligence officer received the highest congressional honor Monday for what a historian described as “defending our country in the shadowy place between diplomacy and war.”

Retired Army Capt. Martin Gelb was part of the Office of Strategic Services, which was created during World War II and was the precursor to the Central Intelligence Agency. He served in England, France and Germany on missions that included supporting U.S. and British operations during the D-Day invasion and assisting with the liberation of the Buchenwald concentration camp.

U.S. Sen. Jeanne Shaheen, who presented Gelb with a bronze replica of the Congressional Gold Medal, said only about 100 of Gelb’s fellow officers are still living and called him a true American hero.

“Capt. Gelb and his fellow operatives fought a secret war. They collected intelligence, they worked behind enemy lines, they developed and advanced weapons and communications equipment, they rescued downed pilots, they helped liberate concentration camps, and yet the courage and bravery was kept classified,” Shaheen said.

From angering his mother by taking apart the family radio at age 7 to a long post-war career at the phone company, Gelb showed a lifelong fascination with how things work. He took apart an early personal computer in the 1980s, and until a few months ago, he was writing computer programs, said his daughter, Nancy Sag.

But the self-described “wiseguy from Brooklyn” initially found himself ill-suited to military life until his radio and electrical skills were noticed and he joined the Office of Strategic Services. Sag didn’t know he was part of the OSS until she was in her 60s.

Gelb said he was overwhelmed by the new attention, which he called “unbelievable.” He said what he most remembers about his time in the Army is the friends he made.

“Unfortunately, I’m the only one that’s still alive. I think of them all the time,” he said. “This occasion has opened up a lot of memories which were stored in my mind that I chose to forget about, but unfortunately, it brings up good and bad memories.”

CIA historian Brent Geary said it wasn’t until the creation of the OSS that the country professionalized intelligence gathering.

“It was courageous, creative and patriotic OSS officers like Capt. Martin Gelb who cleared the way for all of us who have come after, defending our country in the shadowy places between diplomacy and war, collecting information our adversaries want desperately to hide and providing our leaders with the best analysis we can offer of the world’s threats and opportunities,” he said.

But Gelb was humble when an Iraq war veteran stood to thank him for helping set standards that made later wartime victories possible.

“I love the country we have, and I don’t care what anybody says, this is one great country,” he said. “It called upon me and guys like me to perform a task, and we did the best we could.”