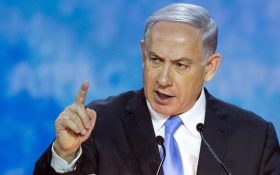 President Donald Trump is not alone on the stage of world leaders recognizing CNN as “fake news.”

Israeli Prime Minister Benjamin Netanyahu came out Tuesday slamming the network, among others, for their report on a policy document released by the Palestinian terror group Hamas.

“Ever wonder what fake news is?” He asked at the start of the video. “Last week, headlines in CNN, Al Jazeera and The Guardian said Hamas now accepts a Palestinian state along the 1967 lines.”

The New York Times referred to the Hamas acceptance as “moderation,” but Netanyahu vehemently disagrees.

“Great news, right? Well, except for one small detail: This is a complete distortion of the truth,” he says to the camera.

“So why does Hamas say there is consensus for a smaller Palestinian state now? In order to destroy Israel later. They want to destroy our state,” he clarified.

Sponsored: This SCAM kills an American every 5 minutes

The anger can be heard in his voice, as he questions the journalistic standards of the liberal mainstream media running rampant in America.

“Is moving from calling for genocide of all Jews to calling just for the annihilation of Israel – is that progress or moderation? Only if you have no standards whatsover.”

He then literally destroys the Hamas document, announcing the only proper place for it is in the trashcan.

Along with the irresponsible reporting from sources that Trump has been slamming as “fake news” for months.