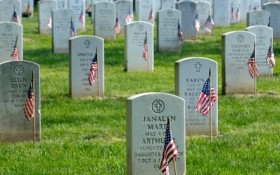 Authorities say furry critters, not vandals, are likely to blame for American flags that disappeared from veterans’ graves in Massachusetts.

The flags at Bellevue Cemetery, in Adams, were first reported missing earlier this month. Residents volunteered to replace the flags by hand, but then those went missing, too.

Police were called to investigate, and Chief Richard Tarsa told The Boston Globe on Monday that officers found evidence that a woodchuck is likely using the flags in its burrow.

Tarsa says a similar incident happened in New York in 2012, where police linked a woodchuck to about 75 flags that disappeared from Cedar Park Cemetery.

He says about 12 to 18 flags were damaged in Adams.

Police say they still plan to keep an eye on the cemetery.