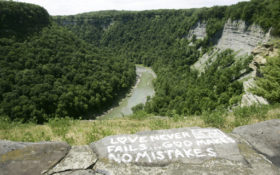 A woman was rescued after the car she was driving plunged 450 feet (137 meters) down a Northern California cliff and a bicyclist just happened to witness the accident.

Authorities say the car could have fallen another 800 feet (244 meters) on Tuesday but it hit a tree that stopped it.

A California Highway Patrol flight officer tells the San Francisco Chronicle it’s likely no one would have seen the wreck on the forested mountainside in the city of Napa if the bicyclist had not been nearby.

The cyclist called 911 and climbed down the slope to reach the victim.

A helicopter lowered paramedics through a narrow gap in the tree cover.

They removed the car’s windshield and hoisted the woman out.

The unidentified woman was hospitalized in stable condition.