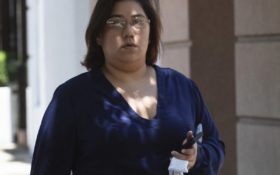 A woman has been sentenced to 15 days in federal custody for throwing a sports drink at a Florida congressman who frequently appears on television supporting President Donald Trump.

Kondrat’yev pleaded guilty to assault in August. She had faced up to a year in prison.

Authorities say Kondrat’yev was part of a group protesting in June outside a town hall meeting attended by U.S. Rep. Matt Gaetz. The second-term Republican was leaving a coffee house when a cup struck him in the back. Several witnesses identified Kondrat’yev as the assailant, and the throw was caught on video.