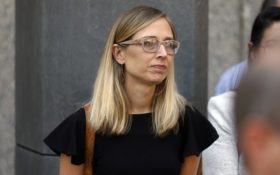 A woman who confronted Jeffrey Epstein at a July bail hearing to tell a judge he touched her inappropriately when she was 16 sued his estate Tuesday, alleging he had subjected her to sex trafficking as part of his attacks on young women and girls.

Lawyers for Annie Farmer filed the lawsuit in Manhattan federal court, along with a lawsuit on behalf of her sister, Maria Farmer, and Teresa Helm, an Ohio woman. All three lawsuits sought unspecified damages.

A lawyer for Epstein’s estate did not return a message seeking comment.

Epstein was arrested in July on sex trafficking charges alleging he repeatedly assaulted women and teenage girls in the early 2000s at his $77 million Manhattan mansion and at another opulent estate in Palm Beach, Florida. He killed himself in his federal jail cell a month after his arrest.

Annie Farmer, 40, was one of two women to speak about abuse at the hands of Epstein as he sat several feet away from them at a bail hearing and to urge that he be kept behind bars.

At the hearing, Annie Farmer said that she met Epstein in New York when she was 16 and that he later flew her to New Mexico to spend time with him there. She said he was inappropriate with her but did not elaborate.

According to her lawsuit, Annie Farmer went to a movie in New York City with Epstein and her older sister, who was working at Epstein’s New York mansion. It said Epstein sat between the women so that Maria Farmer would not see Epstein touching her sister inappropriately.

Annie Farmer, the lawsuit said, was distressed, frightened and confused before she returned to her home in Phoenix.

She later agreed to go to his ranch in New Mexico for what Epstein described as an educational trip for high school students, but she arrived to discover she was the only student there, the lawsuit said.

During her stay there, she woke up one morning to discover Epstein climbing into her bed, announcing: “I want to cuddle,” the lawsuit said.

Epstein then held her down with his arms and pressed his body against her before she escaped to the bathroom, the lawsuit said.

According to the lawsuit, Annie Farmer did not share what had happened to her with her sister until her sister revealed to her that she was sexually assaulted by Epstein during a trip to Ohio.

The lawsuit said Maria Farmer reported the Ohio attack to the New York Police Department, which referred her to the FBI, but nothing came of the claims “to the extreme detriment of Maria and Annie — and also countless other victims who came after them.”

The AP does not name people who say they were victims of sexual assault unless they have consented to being identified. The Farmers and Helm have all consented in recent months to interviews and photographs by multiple media organizations.