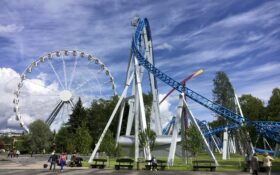 An Ohio woman who passed out while riding a roller coaster at a southern Indiana theme park later died at a local hospital, a coroner said.

Schuck said an autopsy has been completed and the results are pending notification of family members, the Evansville Courier & Press reported.

After Jankovic was found unconscious, she was treated by Holiday World emergency medical technicians before an ambulance transported her to Memorial Hospital in Jasper, where she died, according to a post on the park’s Facebook page.

“A full inspection of the roller coaster has been performed, and it was determined that the ride operated as it was intended to,” Holiday World officials said in that post.

Park officials said that The Voyage “remained closed for the evening out of respect for the family.”

The theme park is located in the Spencer County town of Santa Claus, about 35 miles (56 kilometers) east of Evansville. It opened for its 75th season on May 15.