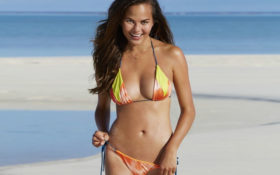 A Minnesota woman who swims topless in Lake Superior says she won’t be dissuaded by someone who called the police on her.

Michelle Bennett was sunbathing topless on the beach in Duluth last month when a woman asked her to cover up, saying she was making the woman’s children uncomfortable.

Bennett refused, so the woman called the police. An officer told Bennett it was not a nude beach, to which Bennett replied that she was not nude — she was topless.

The Minneapolis Star Tribune reports that Bennett has been swimming topless in Lake Superior for years and sees no reason why she has to cover up while men don’t have to.

She and the officer discussed Minnesota’s indecent exposure law. Bennett did not receive a citation, but she did put on a shirt. She says she sees no reason to change how she enjoys the beach.