Woman grabs cop in police station - but it’s not what you think! - The Horn News 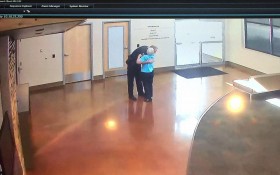 It’s nice to know there are still people out there who show police the respect they deserve.  The Arvada, Colorado, Police Department has posted a photo on its Facebook account of a woman who came into the station just so she could hug an officer.

KMGH-TV (http://bit.ly/1IW0jyF) reports the woman told police on Monday she was upset about the deaths of law enforcement members nationwide.

She hugged 20-year veteran Officer Chris Steiner, who says he responds to almost every fatality the department handles.

He said it’s nice to get a hug rather than observe trauma.

The post has received thousands of likes and generated comments of support.