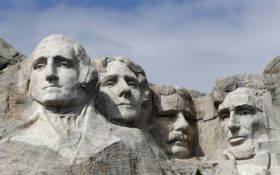 A Nebraska woman has been fined $1,000 for climbing the Mount Rushmore National Memorial in South Dakota.

Authorities say Alexandria Incontro scaled the massive granite sculpture Friday with bare feet and no rope, making it to about 15 feet (4.5 meters) from the top.

The Rapid City Journal says Incontro chose a route between George Washington and Thomas Jefferson, whose faces are about 60 feet (18 meters) tall. Several signs at the popular tourist destination warn against trespassing on or climbing the sculpture, which was completed in 1941.

A federal officer and national park ranger convinced Incontro to come down, and she was handcuffed and arrested.

Incontro, from Omaha, appeared Monday in Rapid City federal court, where she pleaded guilty to climbing the monument. Three other charges were dropped.