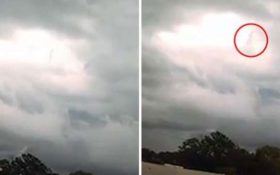 A woman from Tuscaloosa, Alabama captured a video a what appears to be a man walking across the clouds — and some believe it is God or an angel.

The woman, Solo Dolo, posted the video to Facebook and along the millions of viewers of the video, believes this is new evidence that there’s a man living in the clouds.

Dolo had been live streaming a powerful storm at her house and funny enough, had not even originally noticed that strange presence moving through the clouds.

Watch the video for yourself here —

During the video, Dolo says, “Hey, we’ve got a storm over here. We got no power, everything blowing over here, boxes, trees.”

Ironically, Dolo had no idea that the video would gain so much attention when she turned the camera over to a singular bright cloud in the dark sky.

“Look at that hole right in the sky… that’s who’s got the power,” Dolo said.

“He got us covered at least, we’re alright,” she added.

Dolo had only realized the human-like figure in the clouds when people watching her video had pointed it out. Viewers explained that the figure looks like a tall man with arms and legs.

The woman wrote on Facebook after realizing what she had caught on video, “Can’t tell me my God ain’t real! Thank you God for using Lisa StandAlone Baker to reveal this to me. Too see this is to believe this.”

The video has since gone viral on all social media platforms.

After being shared on Twitter, some users believed it was God Almighty, and one person wrote, GOD IS COMING …. Someone is walking in the clouds.”

Lucky for Dolo, she was able to provide Americans with another beautiful miracle captured on video.