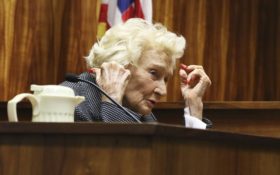 A 93-year-old Native Hawaiian heiress needs someone to handle her estate despite taking testimony from the so-called princess on Monday that she didn’t need a conservator because she’s still alive, a judge ruled Friday.

“Ms. Kawananakoa is a charming and gracious lady, in the best sense of the word. She has a great sense of humor and is tremendously endearing,” said state Judge James Ashford. “Nevertheless, the Court finds … that for reasons other than age Ms. Kawananakoa is unable to manage her property and business affairs effectively because of an impairment.”

Abigail Kawananakoa’s $215 million trust has been tied up in a court case since she had a stroke in 2017.

Kawananakoa says she’s fine. After the stroke, she married her partner of 20 years, Veronica Gail Worth, who later took the heiress’ last name. Board members of her foundation and ex-employees say the wife is manipulating Kawananakoa. Lawyers for the couple dispute that.

Kawananakoa inherited her wealth as the great-granddaughter of James Campbell, an Irish businessman who made his fortune as a sugar plantation owner and one of Hawaii’s largest landowners.

Native Hawaiians consider her a princess because she’s a descendant of the family that ruled the islands before the overthrow of the Hawaiian kingdom in 1893. They have been closely watching the case because they are concerned about the fate of a foundation she set up to benefit Hawaiian causes.

When Megan Kau, an attorney representing Kawananakoa’s former housekeeper, asked if Kawananakoa understood who her trustee is, she said, “Well, I’m not dead yet, so what do you mean trustee? Who needs to handle my estate if I’m still alive?”

On the witness stand, Kawananakoa said she disputed that she suffered a stroke.