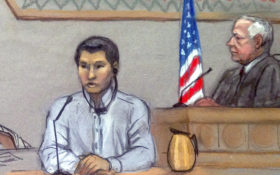 President Donald Trump’s immigration office says a college friend of Boston Marathon bomber Dzhokhar Tsarnaev has been deported to his native Kazakhstan after he was convicted of concealing evidence in the case.

Dias Kadyrbayev was sentenced in 2015 to six years in prison for removing items from Tsarnaev’s dorm room at the University of Massachusetts-Dartmouth, after recognizing Tsarnaev in photos released by the FBI days after the 2013 bombing.

Prosecutors have said there was no evidence he knew about the bombing in advance.

He’s been in the custody of the U.S. Immigration and Customs Enforcement in Texas since August , when he was transferred from federal prison.

The agency says Kadyrbayev was deported and released from ICE custody on Oct. 24 at the Almaty International Airport in Kazakhstan.

He’s expected to be imprisoned in Kazakhstan jail — a far grimier prospect than U.S. prison.

And America is a little safer because of it.