Will the rain impact California's drought? - The Horn News 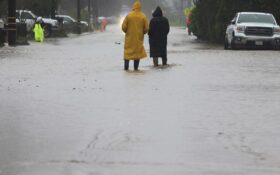 Suddenly, the state has been hit by a severe series of storms, with more expected in the coming days. The rain is soaking a state that desperately needs water, even as it takes a devastating human toll. Experts say it will help drought conditions, but it isn’t yet clear exactly how much. And the rain and snow won’t be enough to fix some of California’s long-term water problems.

“We are transitioning to a climate that is warming and more arid,” said Jeannie Jones, the interstate resources manager at California Department of Water Resources.

Here’s how the storms will affect California’s long struggle with drought:

WHERE IS THE RAIN HELPING?

California has experienced six atmospheric rivers in recent weeks and is bracing for as many as three more, with the wild weather set to continue for at least another week, Gov. Gavin Newsom said Tuesday from Santa Cruz County, where raging ocean water damaged an iconic wooden pier.

The storms have poured a tremendous amount of water on the state, especially in central California, including the San Francisco Bay Area and Sacramento Valley. Precipitation is 138% of average for this time of year, officials said. The storms have also dumped snow on the Sierra Nevada that run along California’s eastern border.

Most of the state’s reservoirs remain below average for this time of year, but some have begun to fill, especially those close to the hard-hit Sacramento region and along parts of the Sierra Nevada. The reservoirs are essential for irrigating the Central Valley, a productive stretch of farmland that grows large amounts of fruits, nuts and grains. The reservoirs also supply water to millions of people living in coastal cities.

For example, a small reservoir in Sonoma County that was at roughly half its historical average on Christmas had risen to 80% of that average by Monday.

“What we’ve got so far puts us in good shape, probably for at least the next year,” according to Alan Haynes, the hydrologist in charge of the California Nevada River Forecast Center.

Snowpack is its own type of reservoir, storing moisture that ideally melts slowly into reservoirs, supplying residents with water during the drier months of summer and fall. But now that snowpack often melts too quickly and reservoirs aren’t able to capture enough of it.

“The California system was built for a climate we don’t have any more,” said Laura Feinstein, who leads work on climate resilience and environment at SPUR, a public policy nonprofit.

WHERE COULD THE STORMS FALL SHORT?

It’s still early in the winter and it’s unclear what the next few months will bring. Last year, statewide snowpack around this time also looked promising. But a few warm, dry months followed, and when snowpack was supposed to peak in early April, it was just 38% of the historic average.

“We are not out of the drought yet,” said Feinstein.

Plus, the storms haven’t dropped as much water on northern California. A reservoir at Lake Shasta that was at 55% of its historical average on Christmas had risen to 67% by Monday — an improvement, but still well below historical averages due to years of water scarcity, according to Haynes.

The atmospheric rivers aren’t striking everywhere. They move around “like a garden hose if you are spraying it across the yard,” said David Gochis, an expert in how water affects the weather at the National Center for Atmospheric Research in Boulder, Colorado.

“Those biggest reservoirs are just so massive it is probably going to take awhile for them to fill,” he said. For some of the biggest, most crucial reservoirs, it may take take five or six such drenchings, he said.

David Novak, director of the National Weather’s Service’s Weather Prediction Center, says the atmospheric rivers still to come will likely be weaker. The problem is the already wet ground won’t be able to absorb much more water, creating problems with runoff. In about 10 days, weather patterns may shift and finally “turn off the spigot,” he said.

And the Colorado River, a major source of water for Southern California, has also been stricken by drought that has depleted major reservoirs on that river. The recent storms won’t fix that problem.

Many farmers in California pump water from underground, with the enormous amounts pulled from aquifers depleting groundwater. Some wells are running dry. It is an entrenched problem and it isn’t going to be solved by a short-term series of storms, experts said.

“Our management of land has prevented it from being recharged very well,” said Mike Antos, a watershed specialist at Stantec, a consulting company. He says the Central Valley needs more places for water flows to seep down and replenish aquifers.

And California is facing a long-term problem. Although there have been some wet years mixed in, California’s drought has been going on for roughly two decades. Climate change is creating drier, hotter conditions in the region, and so the water evaporates more quickly. California officials predict there will be less water in the state’s future.

“So in that big picture, this series of storms really is kind of just a drop in the bucket,” Jones said.